How to use pi in Python

Every student in their life has come across pi at least once. It's often used in mathematical formulas to calculate areas, perimeters, volume, circumference, etc.

Pi has an irreplaceable position in the following domains:

Pi is nothing but a mathematical constant. The approximate value of pi is 3.141592653589793. In mathematics, the Greek letter π represents pi. The pi (π ) is a constant of the math library in Python that returns the value 3.141592653589793. Pi helps calculate the area and circumference of the circle or other mathematical figures. The symbol π (pronounced out as "pi" or "pie") is a mathematical constant that represents a number equal to 3.14159 (for short). It is used in Euclidean geometry to define the ratio of a circle's circumference with respect to its diameter. Also, it has various equivalent illustrations. This unique number emerges in many formulas of the different verticals of mathematics and physics.

Let's take some examples to understand the application of pi (π) in Python:

NumPy (Numeric Python) is a popular data science library that also comes with the Pi constant. One can also access the value of pi (π) using numpy.pi. The numpy module also allows access to several constants and mathematical functions and performs several mathematical operations on arrays. To access the pi (π) value using numpy, one must import the numpy module first.

SciPy (Scientific Python) is also a Python module that allows accessing the value of pi(π). The scipy module comes into use to solve mathematical, engineering, and technical problems. To access the pi (π) value using scipy, one must import the scipy module first.

Even though they return the exact value of pi, Why Python has three modules to access pi (π)

The reason behind having three modules is that:

While using a module, say math or NumPy module, there is no need to import another module to access pi(π)

Using math.radians is the most unusual way to access the value of pi (π). The function radians() converts degrees to radians. To access the pi (π) value using math.radian, one must import the math module first and enter the code as shown below:

Below are some programs in Python that demonstrate the use of pi (π):

Area of a circle: 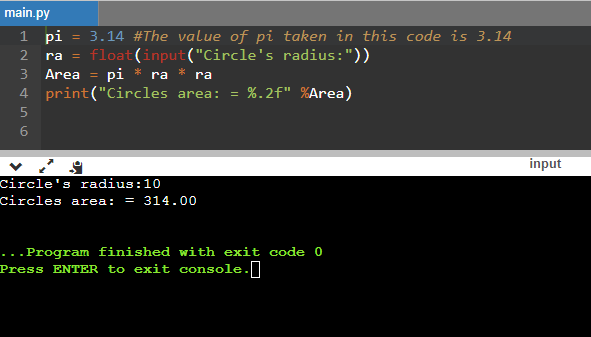 Calculating the circumference of a circle: 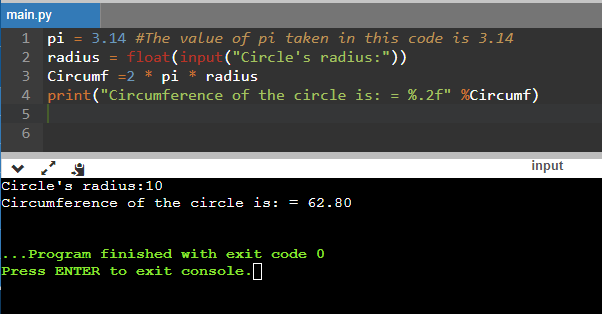 A lot of Python application requires mathematical operations and values to define the various formulae and engineering works such as civil and mechanical engineering. Such software often use the Pi (π) to calculate the area and circumference of the circle or other figures. In Python, pi is a math library constant that returns the value 3.141592653589793.

There are three modules available in Python for accessing the pi (π) value. The reason behind having three modules is to eliminate the need to import a separate module to access the value of pi (π). An unusual or unconventional method of accessing pi (π) is using math.radians.

The radians() convert degree to radians. Among all the above methods, the most efficient way of using the pi is to either use the math.pi or if you are using numpy or scipy module, then do not mention the math.pi separately for using pi constant.