When it comes to large numbers, often, users fail to solve exponents like they generally do multiplication in Python. The term "2^3" becomes much easy for sure as users can multiply the "2" three times and get the result.

But it will not work when users have to code it in Python. So, they need a proper method to solve the exponents. This article will provide the techniques to deal with exponential numbers and a brief explanation of exponents in Python with the following code snippets.

It implies that it will raise the base number or the expression to a certain power. Here, "A" is the base, and "n" is the power or exponent.

How to work on the exponents in Python?

There are several ways to calculate the exponents in Python. These are as follows: 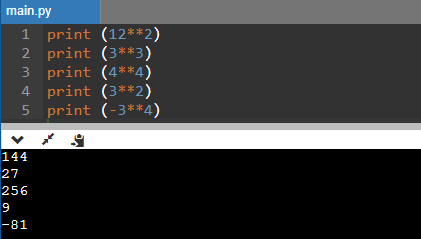 In many cases, when a user wants to raise a negative power, they can use this operator, and the whole expression is inverted. It will look like this:

Using the pow() function to calculate the exponents:

Python has a built-in function that helps to calculate the power of the number or expression. It has two parameters; that is, a base and an exponent. In the output console, it will return the modulus of the result. The result will always be a positive integer. Again, if users want to add a mod argument, such as "c", in pow(a, b, c), the function first performs the task of raising a to the power b, and then it will use the result to perform the modulo task with respect to c. It would be the equivalent of (a**b) % c. 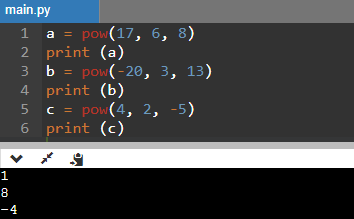 Using the math.pow() function to calculate the exponents:

Python includes another function; called the math.pow() that lets users solve exponents. Like the pow() function, it has two parameters, the base, and the exponent. The primary difference between pow() and math.pow() is math.pow() converts both variables into the floating point and always returns a float, while pow() returns the value in the user-defined data type.

Users can easily do mathematical calculations in Python, but doing calculations with exponents in Python can be a little tricky. But using the above methods, users can efficiently solve exponents. Also, users should remember that the Python interpreter will return a zero division error if they raise zero to the power of any expression.