What is Computer and Its Full Form

From outer space satellites, self-driving cars, artificial intelligence-powered robots, drones to paying your electricity bills online – they are used everywhere! This electronic device can be considered as the pioneer of the technological revolution that shook the world. 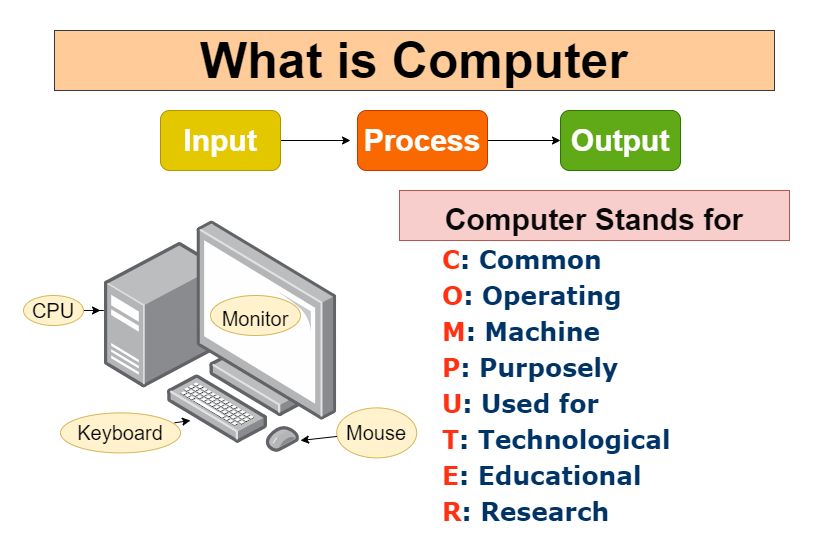 Computers are used in every field including information technology, physics, chemistry, biological sciences, astronomy, archaeology, engineering, and defence. In this post, we will learn the basics of this amazing device.

A computer is a device that can carry out arithmetic and logical instructions very fast. It takes input and processes the output using software and hardware.

But this definition is out-of-date and the computer has come a long way since its invention. Let us now see the system has evolved in the next section.

It is an electronic device that can manipulate, store, process, and retrieve data. Computers are used in daily tasks such as sending emails, playing games, preparing documents, posting comments on social media, and watching videos on YouTube. Apart from desktops and laptops, you can find computers on TVs, remote controllers, ACs, refrigerators, cars, smartphones, and tablets.

Let us gather a deeper understanding of the device. A computer is made of two important components - The Arithmetical Logical Unit and Control Unit.

This part of the computer executes all the arithmetic and logical operations. In some processors, the ALU is divided into 2 more parts –

ALU executes arithmetic operations such as addition, subtraction, division, multiplication, and shifting operations. In the case of logical operations, it executes AND, OR, NOT, XOR functions and Boolean comparisons.

This part of the computer’s processor handles the flow of data through the processor. It also controls the timing of instructions and operations. After receiving instructions from a program, it sends them to the ALU.

The 2 main components of CU are:

Based on technology, computers are divided into 3 broad categories:

These are the computers you come across every day. The IBM PC and Apple Macintosh were the first digital computers to be used. These systems can perform various computational tasks based on the instructions given.

Typically, digital computers use the binary system, which has 2 digits – 0 and 1. These digits are called bits and they are used for representing information.

An analog computer handles and processes analog data. These systems store data in physical quantities and execute calculations using measures. The results of these calculations are represented using symbolic numbers.

These systems can be considered a combination of both digital and analog computers. The digital part handles logical and numerical operations. On the other hand, the analog component tackles complex mathematical operations.

The period between 1940 and 1956 was considered the first generation of computers. The computers were developed using vacuum tubes. They worked on binary code and accepted input using punched cards.

Examples: Mark I and Electronic Numerical Integrator And Calculator (ENIAC)

The period between 1956 and 1963 is the second generation of computers. The transistor technology was used for creating computers back then. Moreover, these systems took less time for performing calculations than the 1st generation computers.

1963 to 1971 was the 3rd generation of computers. The computers of this generation were developed using integrated circuits. These systems consumed less power, heat and were easy to maintain.

The period between 1972 and 2010 is considered the 4th generation of computers. Microprocessors were used for developing these computers. The systems were faster than the other generations. It was this generation when computers were made commonly available for people.

The fifth generation of computers started in 2010 and is continuing. Computers today are faster than ever and can process multiple instructions at a time. Some of the technologies in this generation include artificial intelligence, data science, cloud computing, parallel processing, cybersecurity, and nanotechnology.

Important Components of a Computer

The various physical components of a computer are called hardware. These include a keyboard, mouse, monitor, CPU, servers, etc. These components are used for providing input to a computer. Based on this input or instructions, the system will execute operations.

This is the main circuit board that connects the CPU, RAM, video card, and hard drive. It has ports for all the other peripherals to connect. It is placed inside the CPU casket and has ports for optical drives, memory, and power supply. A peripheral slot is available for inserting video and sound cards.

Central Processing Unit can be considered the brain of a computer. This processes all the data fed into it and delivers the appropriate results. These results may be displayed on the monitor or stored in an application. It contains a processor that is a chip that performs all calculations.

A CPU may have 2 processors (dual-core) or 4 processors (quad-core). Popular CPU processors include Intel Core i7 and AMD Ryzen.

Random Access Memory (RAM) is used for storing information such as machine code and working data. It is like the short-term memory of a computer, where the information gets erased when you shut down the computer. As data is accessed randomly instead of sequentially, RAM is very fast.

This is the part of a computer that stores and retrieves data and is non-volatile. It is attached to the disk controller of a computer’s motherboard. The hard drive is essential for installing programs or software on the system. The operating system is installed on the hard drive along with other applications.

You can install any software of your choice, as long as it supports your system’s hardware. Even PC games are high-end software used for entertainment purposes. Perhaps the most important software on a computer is the Operating System. This acts as a bridge between the user and the system’s hardware. For example, Windows 10 and Mac OS.

Computers have changed the way manual tasks are seen and perceived. Nowadays, you are likely to find an application to perform any task that you can think of. Computers have helped small companies speed up their development and manufacturing processes. This has helped them grow their businesses and turn into large corporates.

All this had paved the way for many job opportunities. Thanks to computers, many people can earn a living even from the comfort of their home, by doing freelance jobs.