JavaScript is referred to as an Object Oriented scripting language, which is mainly used on the Web. This is one of the core technology of World Wide Web content engineering. Mainly utilized for making web pages interactive and providing online programs and video games.

JavaScript was initially known as LiveScript, and later when it was deployed in the Netscape Navigator 2.0 beta 3, it was renamed as Javascript, in December 1995. Javascript encompasses a standard library of objects, like an array, Math, Date, and a core set of language elements like control structures, operators and statements.

Currently, JavaScript can execute in the browser as well as on the server, or on any device which has a special program known as the JavaScript engine. The browsers are equipped with an embedded engine, at times and this is called a "JavaScript virtual machine" (JVM).

Some of the well-known Javascript development framework used are listed below:

Angular.js is known as one of the most beloved and used JavaScript frameworks mainly used for building single page applications. This is available as an open source solution and is supported by Google. This one is highly preferred for hybrid mobile application development.

Embre.js was initially Introduced in 2011 and this is also an open-source JavaScript framework. It was declared as the best JavaScript framework meant for web application development in the year 2015. Ember offers a good solution for a startup or for a business looking for building complex web apps.

React.js was initially created by the team of Facebook developers and was developed in 2013. This is quite new in comparison with other JavaScript frameworks and thus it confidently wins its niche. React.js is the framework which is behind the front-end scenes of the two major social giants Facebook and Instagram.

Was introduced back in 2016, Vue framework delivers server-side rendering, two-way data binding, Vue-CLI along with optional JSX support. Vue.js is known as one of the fastest emerging frameworks till this date.

BackboneJS was introduced in the year 2010. This is known as a lightweight JavaScript library which allows users to develop and structure the client-side applications which run in a web browser.

How to Choose Best Javascript Framework

Not one particular framework can be defined as being objectively the "best". Each and every framework comes with its own pros and cons. The user should ideally depend on his own situation. React and Angular and Vue are relatively the best choices for various projects which end up utilizing them. 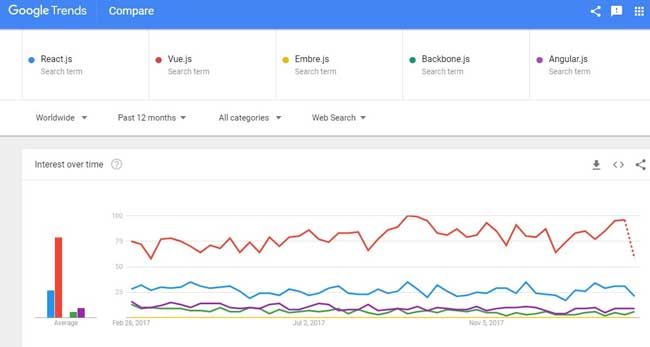 There are, however, many developers working on Angular and React code bases, which is also visible in the Google Trends.

As far as programming is concerned, JavaScript is the present and the near future of programming.

JavaScript is referred to as the native language of the web, and the web is expanding at a very rapid pace because of this. JavaScript is receiving a huge amount of attention from developers who are consistently trying to improve its performance and also aiming at expanding its functionality.

JavaScript programs can also be inserted in any part of an HTML document along with the help of the <script> tag.