In the modern era, most organizations went data-driven, and all of their decisions are curate through data. Every day, a large amount of data gets generated and handled by powerful computers led by artificial intelligence algorithms. Data science and machine learning are driving these enormous data to fetch valuable insights for the betterment of business decisions. In this article, you will learn what linear regression is and how it helps in various data analysis.

What is Linear Regression?

There are two goals of performing linear regression analysis. First, it checks whether the predictor variable is doing a proper job in predicting an outcome (dependent) variable or not, and second, which variables, in particular, are significant predictors of the outcome variable?

When can we use Linear Regression?

Linear regression analysis usually requires some phenomenon of interest and several observations having at least two or more features. Considering the assumption, we can note that (at least) one of the characteristics depends on the others. Data analysts and data scientists can establish a relation among them through this. In other words, we can say that it is a function that maps some features or variables to others adequately.

We can use this powerful method to recognize the circumstances that influence profitability. Forecasting sales for the future month, predicting the customer's requirement, and other future analyses can be done using the data extracted from the existing months and leveraging linear regression with it. Data scientists can also use linear regression to understand various insights related to customer behavior. Linear regression also helps in predicting the weather, temperature, number of residents in a particular house, economy of a country, electricity consumption, etc.

The variation of original responses 𝑦ᵢ,𝑖 =1,…,𝑛, happens partially due to the dependency on the predictor variable 𝐱ᵢ. Nevertheless, it also comes with an extra inherent variety of output. The coefficient of determination (𝑅²) indicates the amount of variation in 𝑦 described by the dependence on 𝐱 using the accurate regression model. Larger 𝑅² denotes a better match. It also determines that the model can describe the output's variation with varying inputs. 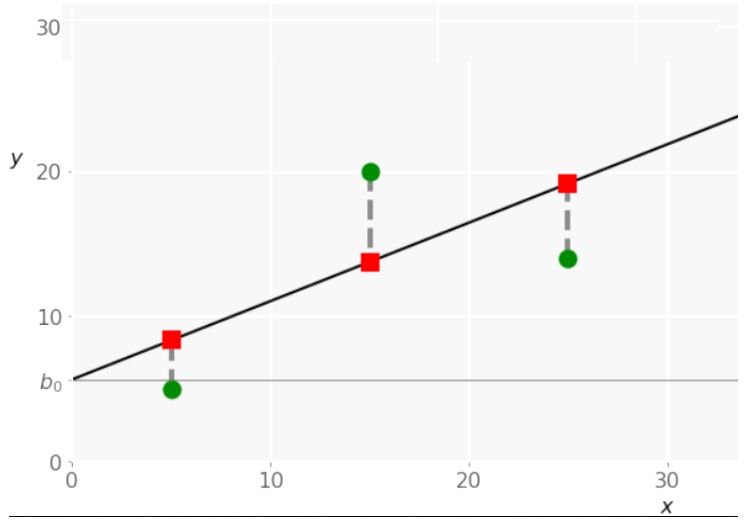 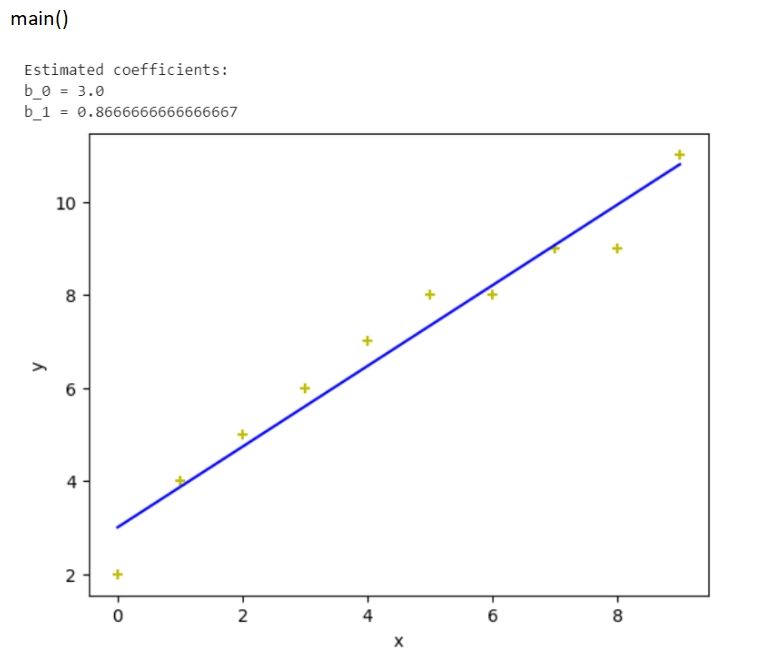 First, we have imported numpy and Matplotlib.pyplot as np and mpl (as their alias name). Next we created a user-defined function name estim_coef() using the def keyword, having two parameters x and y. Within the function, we have created np.size(x) and stored in a variable nn. Similarly, we have calculated the mean of x and stored in m_x and the mean of y in m_y.

Next, we created another user-defined function regression_line() having three parameters x, y, and b. This function is meant to plot all the calculations done in the previous program. We used the scatter plot (mpl.scatter()) and set the color, marker symbol, and size. Also, this function body contains the line graph of the x and y_pred and label it as xlabel and ylabel. Also, we have pushed a separate color to the line (blue using the color code b).

Linear regression is one of the most useful tools of statistics used in data science to analyze the relationships among the variables. Although, it is not recommended in all possible applications because this technique over-simplifies real-world problems by considering a linear relationship among the variables within a relation.

But it is the fundamental statistical and machine learning technique and therefore, there is a good chance that you might need to understand its basic requirements.