2) SRM-MDM Catalog: is the catalog application which has been installed in the web server. The J2EE component is named as SAP_MDM_CAT. The catalog solution comprises of the two main screens:

SAP MDM: is the platform which hosts the catalog contents in a repository. The MDM solution comprises of many applications, and these are the one appropriate for using with SRM-MDM Catalog:

Now that every component has been completely explained as well as defined we will answer the commonly asked questions related to the versioning and compatibility of these applications.

There is no direct dependency between the SRM-MDM Catalog SAP SRM Server. SAP SRM generally communicates with any catalog compatible with OCI 4.0, and this encompassed all the present versions of the SRM-MDM Catalog along with few third-party PunchOut catalogs.

For instance, if the user is utilizing SAP SRM 7.0 EHP2 he can either go with SRM-MDM 7.0 EHP1 or 7.0 EHP2. The catalog EHP number is in no way related to the SRM EHP number.

Q) Which SRM-MDM Catalog versions are the SAP MDM version X is compatible to?

In the release note corresponding to your catalog version, the user can locate compatibility information. For instance :

This refers that this catalog release was initially developed upon MDM 7.1 SP12. User can install the unmatching versions in exceptional scenarios, however as this scenario has not been tested, SAP does not support it.

Q) How can the user identify the versions of my components/applications?

User should access the J2EE component info page of his J2EE server and find the versions of the components SRM_MDM_CAT MDM_JAVA_API MDM_CONNECTOR.

To get the information of your MDM Server, please follow the steps below:

The results of the connection test will look like: 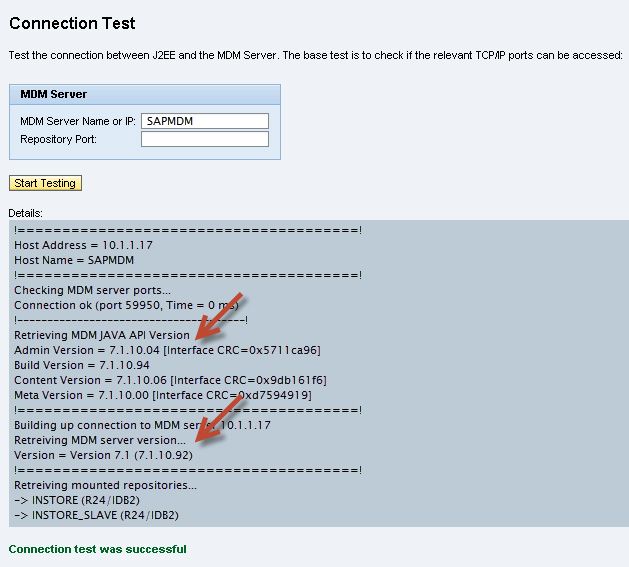 Both MDM Java API and MDM Server should ideally be in the same SP level. If they do not update MDM_JAVA_API and MDM_CONNECTOR to the same SP of MDM Server (read topic 10below on how to obtain the installation files).

Q) Which another version compatibility should the user check in my catalog installation?

All the installed MDM components should be present in the same SP level. This entails the MDM Java API and MDM Connector installed in the J2EE server, the MDM Server and MDM Clients (MDM Console and MDM Data Manager).

Q) What catalog release should the user install in my NW7.5 Application Server?

The catalog release note reflects when it is explicitly tested for NW 7.5. For instance:

Q) If the user upgrades my MDM Server, is he required to upgrade the catalog as well (and vice-versa)?

Upon reading the release note for the target catalog version the user can find out if the catalog release has been built and tested for his present MDM Server (read topic 2).

SAP advised to have matching versions of the catalog and MDM, by following the guidance of the release note.

During the upgradation of the MDM solution, it is much easier to create a new instance of the MDM Server with the newest release rather than the updating the older instance. Post the installation, user can unarchive the older repository on this new server. Post unarchiving, use the "update" option in the right click context menu for making it compatible for the new release.

Obs: Using unmatching versions of Catalog and MDM may work without any issues, but it is untested by SAP and not supported. User should use this option only if it is unfeasible to update the MDM solution.

Q) Can the SRM-MDM Catalog be installed in the same NetWeaver Server like the SRM Portal?

Yes. While SRM-MDM Catalog is an application which doesn't require the Enterprise Portal for executing the user you can have it installed in the same NW Server as the SRM Portal.

If the user runs this landscape, then he should maintain these parameters in the catalog Call Structure: