JavaScript Object Notation (JSON) is a standard text-based format based on JavaScript object syntax. This format is easy and readable to users as its syntax uses human-readable text to hold and transmit data objects comprising attribute-value arrays and pairs. JSON is a language-independent data format.

It supports nearly any type of framework, language, or library. Like other programming languages, users can use comments in JSON to make their documentation more readable and understandable.

What are comments in JSON?

As per the rules of the Standard JSON, there is no official record that tells JSON support comments. According to the standard rules, JSON includes keys and values, and different parsers can parse these using programming libraries.

But, users need to retain support for the parse() method that parses a JSON string and reads and understands the comments even if JSON allows comments.

Syntax of a JSON file:

JSON file takes key-value pair for data. Here, we used the curly brackets that hold the objects, and a colon follows after each name. The comma separates the key-value pair.

It is an invalid syntax in the JSON file. 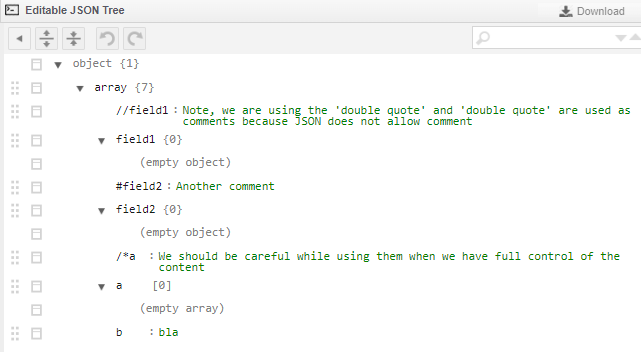 Another example of the JSON comment is as follows: 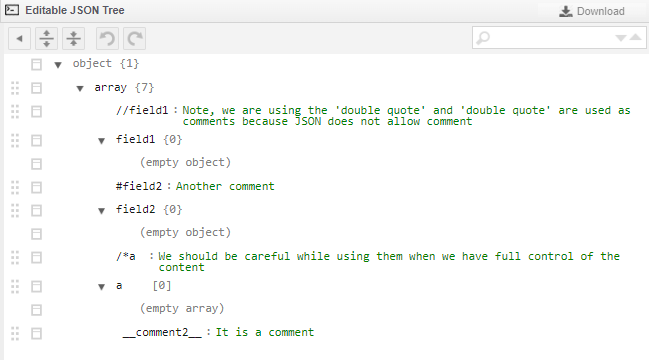 In the above program, we have used underscores to help distinguish the comment from other data in the JSON file.

Note: It is a must to notice that a comment is only a comment in the eyes of a programmer, not the computer.

Another example of using multiline comments in a JSON file is as follows:

Here, we have used multiple comments in the JSON file.

Another example with multi-line comments is as follows:

Why does JSON file not allow comments?

There are many reasons why JSON file does not support comments. These are as follows: