Screen flow logic contains the procedural part of a screen. You create it in the flow logic editor in the Screen Painter, which is very similar to the ABAP Editor. The language used to program screen flow logic has a similar syntax to ABAP, but is not part of ABAP itself. It is sometimes referred to as screen language.

The screen flow logic is like an ABAP program in that it serves as a container for processing blocks. There are four event blocks, each of which is introduced with the screen keyword PROCESS:

·        PROCESS ON HELP-REQUEST (POH) and PROCESS ON VALUE-REQUEST (POV) are triggered when the user requests field help (F1) or possible values help (F4) respectively. You can program the appropriate coding in the corresponding event blocks. At the end of processing, the system carries on processing the current screen.

As is normal with events, you must only program event blocks for the events to which you want the flow logic to react. However, the screen flow logic must contain at least the two statements PROCESS BEFORE OUTPUT and PROCESS AFTER INPUT in the correct order.

Within the event blocks, you can use the following screen-keywords:

The functions of the individual statements are described in the following sections.

To display a screen's flow logic from the Repository Browser, double-click a screen name. The system starts the flow logic editor of the Screen Painter: 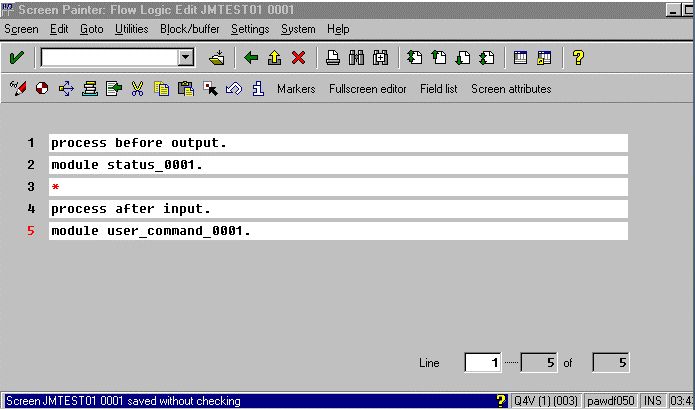 The flow logic editor is similar to the ABAP Editor and provides functions for editing screen flow logic.

Getting Help on Screen Keywords

Position the cursor on the corresponding keyword and choose F1 .

The Screen Painter also offers the global find and replace features of the ABAP Workbench. You can find and replace element names (including generic searches) in the flow logic and element lists. Each search generates a hit list, from which you can navigate to the corresponding object.

The following example shows some use of screen flow logic: