What is SAP KANBAN?

For those of us who are not aware what the term, "Kanban" refers to, this is a process which is related to monitoring and regulating the flow of material and production which is primarily based on the quantity of the material stock in production. This is the quantifiable stock which is prerequisite on a regular basis and is readily kept available in smaller quantities in production.

As per the principle of Kanban, the production of a material takes place only when a certain quantity of the material has been consumed. This refill is initiated directly by production by virtue of using the previously maintained master data. All the existing entries data in the system are thereby reduced to a minimum level - for example, to the input of a bar code. All other activities in the system are directly carried out in the background, automatically. By using Kanban, the process of production has been designed in such a manner that it controls itself and all the manual posting effort is thereby to the maximum extent possible. It has been observed that upon using this principle that there is reduction of lead time along with stock levels. 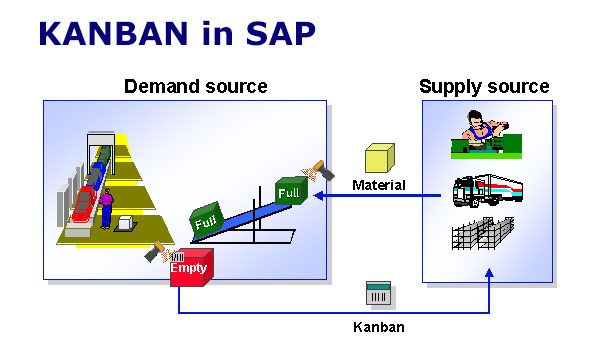 As per Kanban the delivery of the material comprises of the requirement of work which varies as per the demand of the demand and consumer source and by sending a card to the work center which leads to the production of material which can be supply source and producer. This card signifies how much material is used and where all it has to be delivered. These cards are referred to as "Kanbans" in the Japanese terminology. Upon receiving the material, the receipt of goods at the source of demand has to be posted automatically and all of this is done via the bar code which is visible on Kanban.

There are a few requirements which have to be duly considered before using the principle of Kanban in an optimum manner.