In the standard receiver determination, we used XPath to find out the Receivers in the Condition editor. But, with the use of XPath, the functionalities are limited. Using XPath become complex in case we have to get substring or do arithmetic operations etc. Moreover, more than one node cannot be used in evaluating conditions.

All these features can be incorporated using the enhanced receiver determination. The list of receivers can be determined dynamically at runtime, using a message mapping.

A typical usage case is if you do not yet know the names of the receivers at configuration time. In this case, you can define a mapping program, for example, which reads a list of receivers from a table or from the payload of the message at runtime.

When there is a need of separating Applicants list into two, one for Major and other is for Minor grouping by age limits (<=25, >25) and send lists to different servers, then we can use this enhancement.

Graphical Representation of Scenario Steps to be Maintained in Integration Repository

Additional steps to be maintained in Integration Repository

Define Message Mapping between Outbound Message Type and Standard Message Type “Receivers” which is as Inbound message type and which is in the SAP BASIS --> http://sap.com/xi/XI/System 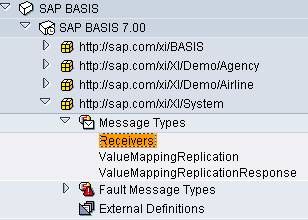 Define the message mapping or mapping program that is to determine the receivers at runtime. The screen shot of message Mapping is as shown below.

The necessary sender and receiver agreements are created.

Case 1: In order to test the scenario, creating and Applicants source file with one employee age less than or equal to 25 and other one employee with age greater than 25.

The corresponding XML file to be placed in the source FTP server is,

Output: The output of the above file is, two target files on two target FTP Servers, one with employees age <= 25 and other with employee age > 25. Here two receivers are identified based on content of the payload.

The corresponding XML file to be placed in the source FTP server is,

Here only one receiver is identified based on the content of the payload.