How to handle SPDD/SPAU during the Update/Upgrade

Following are the Steps to handle SPDD/SPAU during the Update/Upgrade.

Transaction SPDD permits you to adjust the alterations to ABAP Dictionary objects during an upgrade.

Before adjusting the rest of the modification, s have to be adjusted for ensuring that no errors are made in the implementation because of modifications.

This is recommended if you only need to adjust a small number of objects.

This is recommended if you need to adjust a large number of objects.

Modification Adjustment on the, development system, the first system.

Modification Adjustment on the next systems (Quality/Productive system) 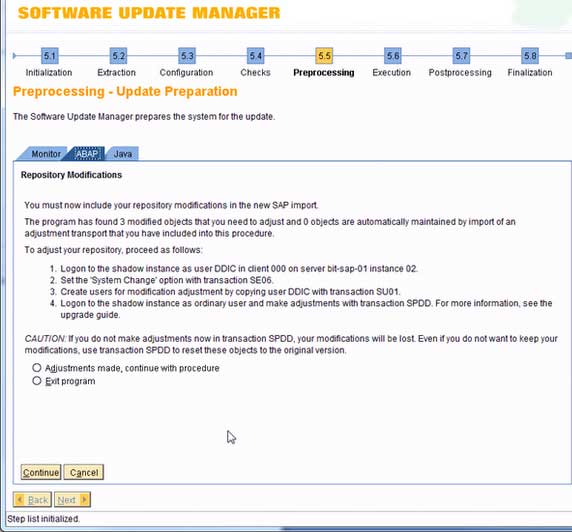 Modification Adjustment on the next systems (Quality/Productive system)

Preconfiguration mode STANDARD and ADVANCED only:

Incase you missed to add an adjustment transport in ADJUSTPRP and you are already in ACT_UPG phase, you still a workaround to import a SPDD request (see SAP 610311).
*** WARNING *** Please make sure you read and understood the risks mentioned in 610311!

Use the following steps only in urgent cases but not in productive environment:

Stop SUM/SAPup and execute the below command:

You need to Double-check transaction SPDD, to enure that all objects are correctly adjusted! If its does happen that you continue as described above under "Modification Adjustment on the first system (Development system)"

Continue in SUM ... until Phase SPAUINFO. You will be able to see the number of modified repository objects to be adjusted.

Also Double-check transaction SPAU to make sure that all objects are correctly adjusted! Incase not then continue as described above under "Modification Adjustment on the first system (Development system)"