What is SAP Testing?

SAP – System Applications & Product is an ERP used in various sectors such as finance, logistics, human resource etc. to manage their business efficiently. SAP Testing is very important for the smooth functioning of the application/software. SAP testing is finding errors, checking the functionality of each module, check the standards as per the requirement of the clients and the application should work as per the configuration etc. 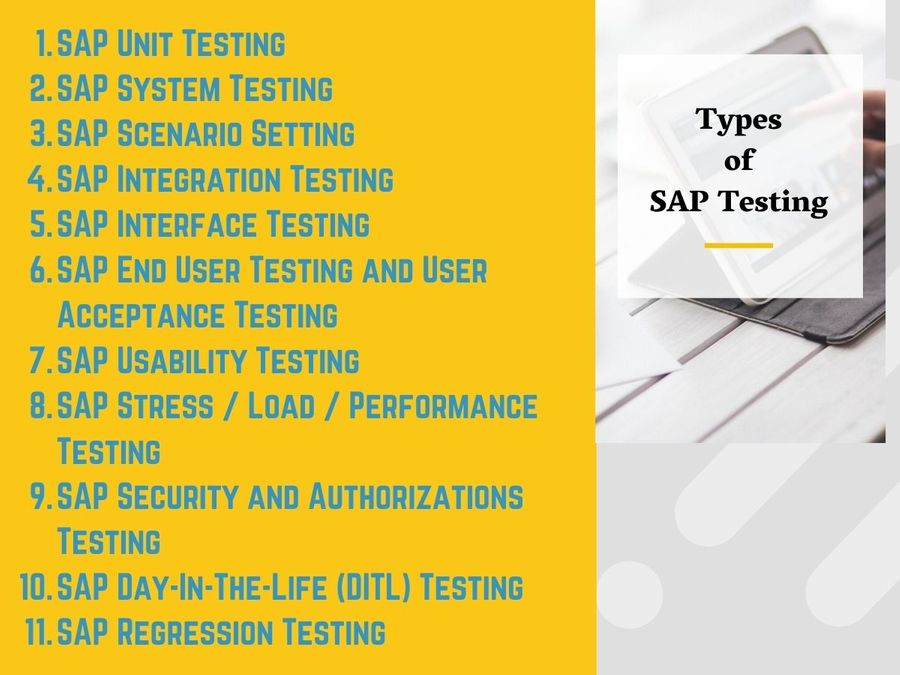 In Unit Testing, every unit or components or isolated pieces of software is tested. It is a kind of white-box testing generally performed by developers who have knowledge of code and programming. It is used to test the functionality of every unit of the software. So, what is the unit? The unit can be a small piece of code or any component/small application of the software. It reduces the cost of testing as bugs are finding in a very early stage of development.

For Example: If we have to test one form to create a purchase order, the white box tester should know that Purchase Order should be saved using the data from materials, client list, price of the product etc.

In system testing, we check the integration of the application of SAP system to make sure that linking between applications should work properly in the development environment.

SAP Scenario Testing is to check for specific business cases. It is also performed in the development environment based on the specific set up and requirement of the client.

For Example, Tangible products and services to be processed differently from others. Then it has tested based on specific requirement and set up given by the client.

SAP Integration Testing is like scenario testing but this type of testing generally perform on realistic data or real-world data. Its check that the system should work on realistic data, checking the reports etc.

Interface refers to transfer data from one system to another. Interface testing is checking whether the interface is able to pass the data from one to another system based on the system configuration. All the look and feel of reports as per the standards.

For Example, Attendance entered in the employee's attendance module is transferring the details to the HR Module.

SAP end-user testing and user acceptance testing is done in a QA environment. This type of testing done using realistic data with the security and authorisation of the end-user. This is time looking back at the requirement given by the client/blueprint of the processes and checking of the system working as per the functionality, requirement, and specification given by the user. End-user will check that their requirement has been fulfilled and they can work as per the requirement.

SAP Usability Testing is used to find how many mouse clicks and keystrokes it takes to run any process. Its check the navigation of the application to check the flow of the system.

This type of testing is done to check the

For Example: If the BPP, Business Process Procedure shows that the invoice should be generated in 5 seconds that means it should 5 sec, not 6 seconds.

SAP DITL testing is a type of testing which is performed to check the system should work as it's expected to work. This testing performs on real users, real data, process execution as the client expected that the system works in day to day life to manage the business. It is done just before the system will go live.

SAP Regression Testing is done to check if any changes/ configuration changes/adds on in application whether they affect the already running applications or not?

In SAP, in all stages, testing is required to test the functionality of the system. All the types of testing are discussed in the article have their own benefits. Testing is required in the development as well as the QA phase to check the application is working as per the configuration and standards mentioned in the BPP Business Process Procedure. All types of testing will benefit us to find the errors at the early stage and QA stage to launch the error-free software.