It comes as no surprise that SAP stands at the number 3 position as per Forbes magazine in terms of the most admired software companies to work for in the United States of America.

SAP has been proving time and again that their strategies are extremely state-of-the-art and offer progression to all their customers, irrespective of where these modules are implemented.

The data has been compiled from Foote Partners which provides a latest database of salaries in 83 North America cities and across metro areas for more than 172 IT jobs, which include a plus premium pay for 835 certified and non-certified technical skills.  The research done in 2016 was compiled from confidential information about 208,000   IT professionals shared directly with Foote Partners through January 1, 2017 and is regularly updated.

Let us see and understand the various job titles within SAP (Systems, Applications, Products in Data Processing), in USA, as per the recent demand in the market presently.

The junior most level is listed at the bottom of the list, and as the levels graduates, the highest level is seen at the top. 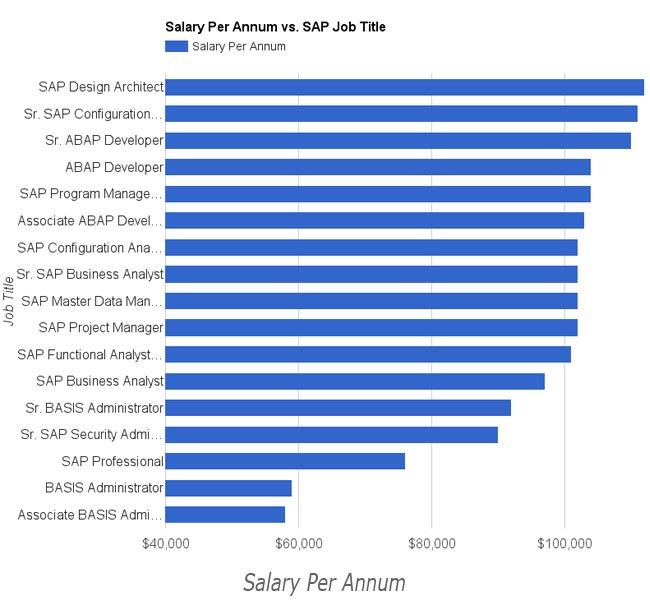 It has been commonly observed that while roles and level vary as per the company as each company has their own way of benchmarking salaries and titles, salaries are also dependent on the city the individuals reside in.

Similarly, a SAP professional in New York may earn anywhere between $93,000 to $195,000 and the same person if he works out of Boston his salary will be 26% higher than average SAP Professional salaries for job postings nationwide.

There is a very high demand of the following skills as on 2017.