☰
HomeFull form of SAP and What does SAP Stands for?SAP Keyboard ShortcutsSAP Training Tutorials for BeginnersHow to become SAP Consultant and Salary in IndiaSAP Full Lifecycle ImplementationSAP Version and Release HistoryWhat is SAP IDES?SAP Modules in DemandList of Companies using SAP in IndiaSAP Experience: : All You Need to KnowSAP Module is in Demand in USASAP Tips and Tricks for BeginnersSAP Module for your Career

Top 10 IT Skills with Rising Salaries for Year 2017

Some professions are always in demand and the IT industry is ranking number one in this list. As the demand for software professionals is growing by leaps and bounds, employers don’t hesitate in shelling out a fortune when it comes to hiring the best talent available in the market place. As per the data taken from the U.S. Bureau of Labour Statistics clearly depicts in 2016 IT employment grew by 3.1% and by almost 44% of IT managers for all those who participated in Computerworld's 2017 IT Salary Survey.

The participants of the Computerworld survey reported an average compensation increase of 3.9% in the current year which has been the highest pay hike, since 2001. Research firm Foote Partners reports a 3.3% which reports an overall rise in IT skills along with certification pay premiums for 2015, and the IT staffing firm Robert Half Technology has even predicted that in 2017 the starting salaries for techies will increase by almost 5.3%. 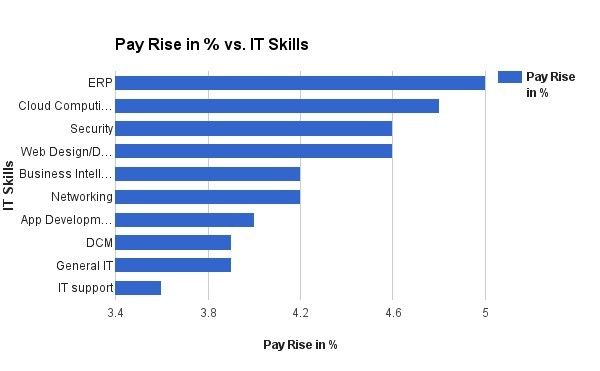 All those folks working in ERP- Enterprise resource planning have received the highest year-over-year compensation gain of 5%, as compared to any other IT skill. Enterprise resource planning is all to do with managing a software system as it relates to both the automation and integration of the key parts along with the software. The core focus is on process engineering, which makes this skill stand apart from the others.

As per the Computerworld's Forecast 2017 report, the cloud is a high priority sector, especially in the moving enterprise systems and applications. The could experts received an annual hike of almost 4.8% in this period, as many more organizations are working on the cloud technology thus making it much more competitive for people and performance.

Information security expertise is the most sought after field in the IT domain. The average hike received was that of 4.6% in 2015. It wasn’t surprising to know that almost a quarter of IT managers who were keen to increase their staffs in the current year have mentioned that they plan to develop themselves in the field security. All the focus of the organization has been diverted to security.

Almost all companies have a website of their own nowadays and for handling their day to day operations the demand for hiring skilled Web designers and developers seems to be growing. As per the Computerworld's IT Salary Survey, there was an annual increase of 4.6% for these workers in 2017. There are plenty of jobs available for individuals who have good web designing and development skills.

The demand for business intelligence and analytics systems is increasing high as these are the people who are assisting the systems and their users. The average hike was close to 4.2% in 2017. Data plays a critical role and all those people specializing in this field can even earn a higher amount.

There is an increase in the demand of application developers. These folks not only work on the back-end software which helps in managing the day to day operations but also help in the customer-facing apps. The average salary hike for this was almost 4%. Companies do not hesitate in giving a good amount of hike to application developers who come with prior experience.

As more and more companies are moving more towards private clouds, the need for managing data centres is increasing. Data centres also need trained and skilled professionals who can manage the operations of the data centres efficiently. Similarly, the new business models also, want noteworthy data centre capacity. Individuals managing the data centres received an average boost in the pay of 3.9% this year.

Is this surprising, well it shouldn’t be! Close to 20% of the hiring managers plan to get almost 20% require IT generalists. The average salary hike has been close to 3.9% for IT generalists. Companies prefer to get individuals who can manage multiple roles and are willing to take up any challenge, for this, there can’t be anyone better than an IT generalist.

More and more companies are using complex devices and systems which leads to an ever-growing demand for IT support and helpdesk. As per the IT Salary Survey individuals working in the helpdesk received an annual hike of 3.6%. This is most sought after skill these days and almost 33% of the hiring manages plan to hire people who can work in the help desk.

The annual salary hike has been a little higher in some skills, depending on the need for resources and the skill, which leads to a better hike and offers more growth.